Martius was the first month of the early Roman calendar. The original Roman year consisted of 10 months and counted 304 days followed by an unnamed winter period which length was not clearly defined. This calendar, borrowed from the Greeks, was introduced around 700 BC by Romulus, the legendary founder of Rome. Needless to say, it was a total mess.

Martius – Mensis Martius – was named by Romulus after his own father, Mars, the god of war.

Spring is coming way too slow – it is unacceptably cold here. I did not move from Northern France to Alabama to be so cold.

Beside that, I am still working on several traditional pieces,

I laid all the tiles of Boer Goats, flipped it, and now need to clean it up before I can grout it. Cleaning is my least favourite part of the process, and it has to be performed outdoors. Had the weather been  warmer in February, I would have completed this piece, but then, March it will be !

Yabusame, at the end of February, is about 50 % complete, it is a big piece and I take my time to chose and cut my tesserae. The bright yellow background of the model is anything but yellow as I am using at least 20 different colors to lay it ! For now, the background is 80 % complete, I have worked a little on the horse and none on the Samurai.

Slowly progressing on this, I published 3 patterns so far, available on this blog. My goal is to publish one tile per week. Hopefully I should be able to keep the pace in March.

Please remember that those tiles I publish are free for everyone to use for any type of graphic project, here are the first 3 published tiles :

I will also be working on a commission minaudiere for a good friend of mine. She had seen one she liked at the Peanut Gallerie, but wanted something “even brighter”, in a yellow gold frame.

Frédéric LECUThttps://mosaic-blues.com/
I have always been fascinated by ancient art and architecture. Why and how did our ancestors build the Pyramids, Stonehenge, the Pont du Gard, the Cathedrals ? Even today, building such monuments would represent a technical challenge.
Previous Post
February
Next Post
Mosaic Models 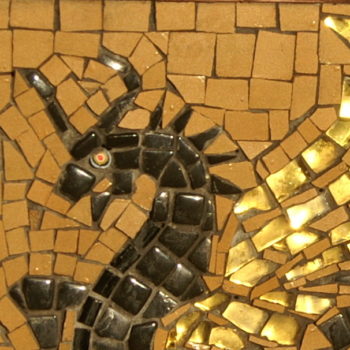 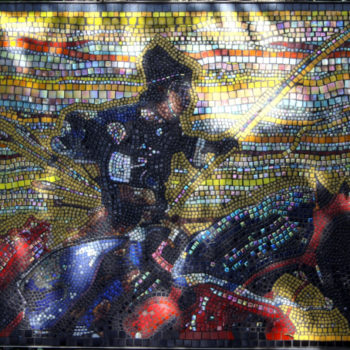 Mosaic Show : The Eyes are the Mirror of the Soul 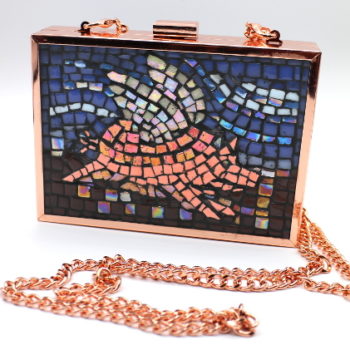