In Greek mythology the Muses were the goddesses of the inspiration of literature, science, and arts. They were considered the source of the knowledge embodied in the poetry, song-lyrics, and myths that were related orally for centuries in these ancient cultures. Later adopted by the Romans as a part of their pantheon, they were often represented in paintings, sculptures and mosaics.
The Muses, personifications of knowledge and the arts, especially literature, dance and music, were the nine daughters of Zeus and Mnemosyne (memory personified). Although the account and description made by Hesiod in his Theogony was generally followed by the writers of antiquity, it was not until Roman times that specific functions were assigned to them.  Even then there were some variations in both their names and attributes.
The Muses were sometimes represented individually as in the well known portrait of the roman poet Virgil at the Bardo Museum in Tunis.
They were also often grouped together in squares or medallions. But because such mosaics usually occupied a huge surface only a few of those mosaics came complete to us.
I have listed below a few of these remarkable pieces and their location so you can actually go see them. All these muses mosaics are displayed in superb museums where you’ll enjoy many more mosaics and splendid art.

A gorgeous and brightly colored piece was discovered in Zeugma, Turkey in 2014. The muses are arranged in a circle around Calliope. They are identified by their names written in Greek letters inside each individual medallions. This mosaic can be seen, with many other splendid pieces, at the Zeugma mosaic museum. Built in glass tesserae in the 2nd century BC, this is the oldest of the mosaics listed here.

An other superb piece is displayed at Kos in the Palace of the Grand Master of the Knights of Rhodes. The muses here are not identified by their names but by their specific characteristic object as described in the above table.

Far away to the North in the Empire a beautiful floor featuring the muses in full (not just their faces) was unearthed in the Village of Vichten close to Luxembourg. Calliope and the poet Homer sit at the center. They are surrounded by the other eight ones. Each muse is inscribed inside an octagon bordered by very elaborate geometric patterns. They are identified by their names here written in Latin characters. They can be seen at the Musée national d’histoire et d’art in Luxembourg

60 km East of Luxembourg, in Trier (the ancient Augusta Treverorum) the 9 sisters are represented arranged on a square grid. Here like in Vichten the individual portraits are bordered by very elaborate geometric patterns, but the strict, regular square pattern contrasts contrasts with the usually lighter atmosphere surrounding the goddesses of music, arts and poetry !  This piece can be seen at the Archaeological museum of Trier, Germany.

At the Roman Villa of Torre de Palma in Portugal, contrary to the usual way of grouping them in a circle or square, the muses were represented in a line. This is the latest piece we have of the muses represented together. You can see it at the National Archaeological Museum of Lisbon

An other beautiful muses mosaic is displayed at the El Djem museum in Tunisia. Like in Vichten, the muses are identified by their characteristic object. The decoration around them is realized in a different style which making use of no straight line seems to flow effortlessly.

About visiting museums. I have learned the hard way that it is always a good idea to double-check ahead of your visit their days of openings. Check their websites…

All French museums for example are supposed to be closed on Tuesdays. Except when they are not… The Musee Gallo-Romain of St Romain en Gal for example is closed on Mondays and I am still to visit it. Also, consider national holidays. When I arrived from Trier to Luxembourg from 2 years ago I was greeted by huge gun salute (quite impressive I must say), but could only see the gates of the museum, because June 23 was the official birthday of the Great Duke.  And after my visit of Conimbriga 4 years ago when I was in Lisbon on January 2 and 3 no museum were opened. (Wine, food and people were nevertheless splendid)… Call, check the websites…

An etymological note : The words “Muse”, “Mosaic” and “Music” share the same etymology. Medieval Latin “musaicum” literally meant “of the muses” and was used to designate what we later called “mosaic”.

Frédéric LECUThttps://mosaic-blues.com/
I have always been fascinated by ancient art and architecture. Why and how did our ancestors build the Pyramids, Stonehenge, the Pont du Gard, the Cathedrals ? Even today, building such monuments would represent a technical challenge.
Previous Post
How I recreated the Julia Felix mosaic
Next Post
Europa 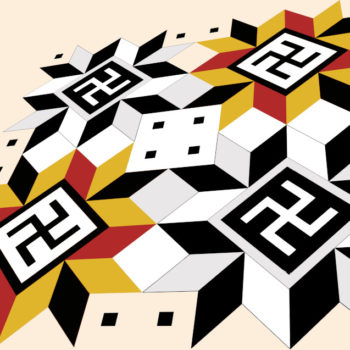 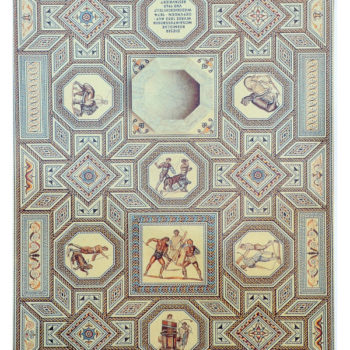 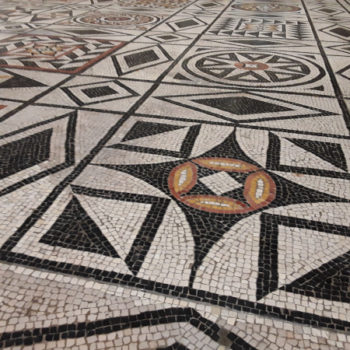 Mosaic model of the week – Lugdunum 01