I may never get to see some places i would love to see which are set in dangerous areas : Syria, Libya, Algeria… Still, little by little I am getting there. After Conimbriga, Portugal in 2017 and Italica, Spain in 2018, this winter was Volubilis in Morocco !

The capital of antic Mauritania

Volubilis stands above a fertile plain 20 km north of the modern city of Meknes in Morocco. Archaeological excavations at the site have found Neolithic pottery similar to pieces found in Iberia. By the third century BC, the Phoenicians were there.

After the fall of Carthage in 146 BC, Mauritania became a Roman client state. In 25 BC Augustus placed king Juba II of Numidia, who had been educated in Rome, on the Mauritanian throne. Although of Berber ancestry Juba’s preference for Roman art and architecture was clearly reflected in the city’s design.

After Claudius annexed Mauretania in 44 AD, the city became the administrative centre of the Roman province of Mauretania Tingitana. Volubilis was connected by road to Lixus and Tingis (modern Tangier).

Volubilis grew rapidly under Roman rule and expanded to cover about 42 hectares (100 acres). The city gained a number of major public buildings in the 2nd century, including a basilica, temple and triumphal arch.

Its prosperity, derived principally from olive growing, prompted the construction of many luxurious patrician town-houses with large and gorgeous mosaic floors. At its peak in the late 2nd century, Volubilis counted around 20,000 inhabitants – a very substantial population for a Roman provincial town. 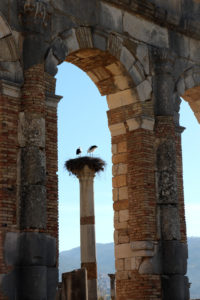 There are numerous gorgeous mosaics to be seen there. Some are in really good state thanks to the dry climate, some were badly damaged by exposure and others, like the one of the 12 labours of Hercules, were damaged by questionable restoration.

I visited the site in late December, the temperature was perfect, around 18 Centigrade, mid 60s Fahrenheit. To visit in summer, get there very early and bring lots of water to drink. Wearing closed shoes may also be a good idea as scorpions and snakes might be hiding under the stones.

If you really are interested in mosaics, I would advise to visit on a rainy day as the water really brighten the stones.

From Fes or Meknes, you can take a Taxi to Volubilis. You should agree on a price before you go.

Access to the site was 70 Dirhams per individual – (about $7.00). You can hire a guide for an additional fee. Our guide was not very pleasant, but he gave us an overview of the site in a tour that lasted about 1 1/2 hour.

After this first guided tour, we visited the beautiful museum. After this the rest of my family got back in the cab and went on to visit Meknes.  I stayed on the site to do my own detailed visit and realized the guide had not shown us but 1/3 of the mosaics of the site.

Lose yourself among the ruins

If you are really interested in mosaics, I would advise to spend at least 6 hours on site, and make sure you have enough batteries in your camera to shoot all the pictures you’d like to. There is a little bar – restaurant serving hot and cold beverages and food right a the entrance to the site, they also offer a beautifully illustrated book in French and English about the site.

Some of the mosaics are in a great state of preservation.

Some are in a terrible state, I am not sure why this is.

Some have been restored in a questionable way,

The most beautiful mosaic discovered in Volubilis was moved to the Museum of Tangiers.

The house of Venus

2 great pieces were located in this house, one of the richest domus of the town. Both pieces represent classical mythological scenes involving water nymphs

Thou shalt not sneak up on a naked Goddess

The Diana at her bath mosaic illustrate the story of the unfortunate and not so bright young hunter Actaeon. The young man hunting in the woods accidentally stumbled upon Diana, goddess of the hunt, enjoying a swim in a spring with her escort of lovely naked nymphs. Not a very wise move! Diana enraged furiously splashes water upon poor Actaeon who starts growing antlers and turns into a deer.  Acteaon flees in great fear to be  killed by his hounds who fail to recognize him as their master.

You can’t trust hounds, that why I have Border Collies. But then, I don’t hunt.

When the goddess is gone

This second mosaic from the house of Venus describes how Hylas was kidnapped by the nymphs of the spring of Pegae.  Hylas, companion of Hercules and the Argonauts, walked to a spring to fetch water to bring it to the ship. When the nymphs saw the lovely youth, they instantly fell in love with him, pulled him under the water and he vanished without a trace. This upset Heracles greatly, and he searched for him for long time but he never found him for he had fallen in love with the nymphs. Who could blame him ?

Now I like Hylas’ story better than Acteaon’s. I have seen it represented on mosaics in Volubilis, Italica, and Saint Germain en Gal. In a near future I’ll post about similarities – and differences –  in their composition.

The house of the big cats

The house of Dyonisos features a great number of small portraits of the God Dyonisos and his musician friends, as well as personifications of the 4 seasons.

The term “desultor” (Latin “one who leaps down”) has been applied to individuals skilled at leaping from one horse or chariot to another. This house was decorated with an interesting mosaic of an acrobat riding an ass backward.

The house of the knight

The house takes its name from a bronze statue of a rider found here in 1918 that is now on display in the archaeological museum in Rabat.

In Greek mythology, Ariadne, daughter of King Minos of Crete helped Theseus in his mission to slay the Minotaur on the condition he would marry her. Theseus killed the Minotaur, but was a forgetful guy. On their way to Athens as Ariadne had fallen asleep on the island of Naxos, he forgot about her and sailed away leaving her on the beach. Those Greek heroes can be so forgetful… Distraught by abandonment, Ariadne was still sitting on the beach when Bacchus – the god of wine and revelry also known as Dyonisos – appeared with a procession of his followers. When he spotted Ariadne he instantly fell for her. Ariadne returned his affection and they got married. She gave him 6 sons and they lived happily ever after, which is a long time when you’re an immortal.

I will share more pictures and stories about the Volubilis mosaics in 2 next posts, one very similar to this one presenting the mosaics of individual houses, and one dedicated to the remarkable geometric patterns I recorded there.

Frédéric LECUThttps://mosaic-blues.com/
I have always been fascinated by ancient art and architecture. Why and how did our ancestors build the Pyramids, Stonehenge, the Pont du Gard, the Cathedrals ? Even today, building such monuments would represent a technical challenge.
Previous Post
Zellige mosaics
Next Post
Welcome to March ! 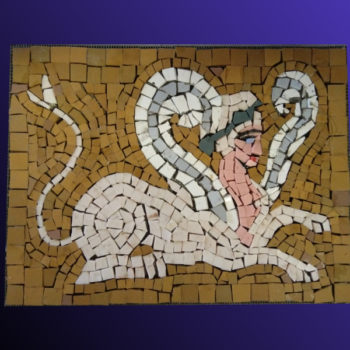 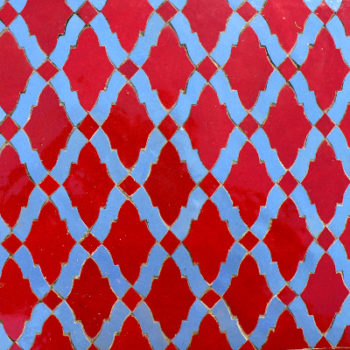 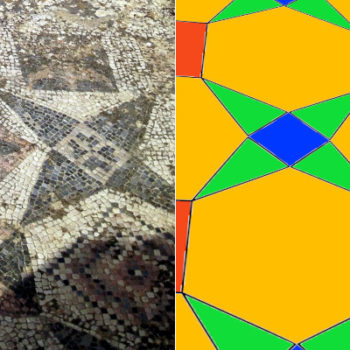