The Lullingstone Roman Villa was built near the village of Eynsford in Kent, south eastern England.

Originally constructed in the 1st century, the Lullingstone Villa was repeatedly expanded and occupied until its final destruction by fire in the 4th or 5th century.

Around 150 CE, the villa was considerably enlarged. It may have been used as the country retreat of the governors of the Roman province of Britannia. In the 4th century a room, probably already in religious use, was converted to a Christian chapel or house church, much the earliest known in the British Isles.

A large mosaic was built in the triclinium (formal dining room) during the 4th century. Some ellaborate geometric composition surround 2 mythological main scenes :

Today We’ll focus on Europa. The myth of her abduction by Zeus, transformed into a white Bull, was popular throughout the whole Roman Empire and it has been represented many times by antic and modern painters and mosaicists. (See my article on Europa’s abduction)

I find this Lullingstone’s Europa mosaic quite interesting  because of the inscription at its top, which has been interpreted in many different ways by various scholars, and because of its style quite distinct from most other Roman mosaics.

The inscription at the top of the mosaic reads : ” INVIDA SI TAURI VIDISSET IUNO NATATUS / IUSTIUS AEOLIAS ISSET AD USQUE DOMOS” can be, according to The Oxford Handbook of Roman Britain, translated as : “If jealous Juno had seen the swimming of the bull / more justly would she have gone to the palace of Aeolus”. It is a reference to the First Book of the Aeneid in which Virgil describes how Aeolus, god of the winds, raised a dreadful storm at Juno’s request.

So here we have a clear reference to Classical Pagan mythology. And this is quite interesting that the Lullingstone Villa harbors the oldest Christian wall paintings ever found in England, dated from the same period…

Some scholars have tried to find some hidden Christian meanings in the Lullingstone inscription. Personally, I am quite a fan of Ockam’s razor and find this kind of farfetched obscure and esoteric hypothesis quite questionable. But what do I know ? You may want to figure this out by yourselves by clicking on the link…

I recreated the whole design of the mosaic

Just because I love it, and because I plan to use it in my post Covid – post American mosaics.

Because it was quite an intricate job, I am not going to explain all the details but I will expose its main stages.

I like to work in stages and separate the various parts of a design I want to recreate. It is a good idea to work separately on geometric and figurative parts, and on parts of different colors. So basically for this mosaic I recreated several designs : 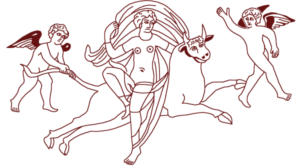 I created this design by tracing the actual lines of the mosaic on a new layer in GIMP. Now this can be quite time consuming, but there is no other way… 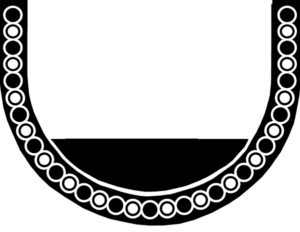 I created the border by combining elementary pattern of concentric patterns on a bigger circle. (This is a classical way to generate circular geometric borders by repetition / combination of elementary patterns along a wide circle – I will explain the simple math and way this is practically done in a future post). The black part at the bottom of the border is symbolizing the ocean into which Zeus jumped to take Europa from Phoenicia to Crete. It is a very simple intersection of a circle with a straight horizontal line. 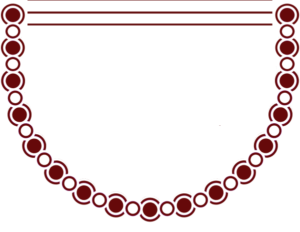 This part was actually designed in 2 stages : the border pieces were designed by filling up empty spaces of the Black geometric border; and I traced the horizontal lines framing the black inscription.

As usual I used both the GIMP and INKSCAPE softwares. These are excellent programs available for free online. Here are the 4 stages of the work :

The procedure described here is highly simplified of course. I spent about 6 hours recreating this drawing. (I made a few mistakes…) This may sound a lot of times. However, the fact that I work in different stages (or layers) means that I can later use some of the intermediate stages to create other designs.

I for example created a circular border by combining the basic elements of the mosaic. I will be later able to use this border in other works.

In future posts I’ll get into details of the operations described here. I will also tell you about Bellerophon (The guy who slays the Chimera, actual ancestor of St Georges the Dragon slayer). If all goes well I will be traveling back to France next week and it may take some time before I can publish. In the mean time, don’t hesitate to ask if you have questions.

Frédéric LECUThttps://mosaic-blues.com/
I have always been fascinated by ancient art and architecture. Why and how did our ancestors build the Pyramids, Stonehenge, the Pont du Gard, the Cathedrals ? Even today, building such monuments would represent a technical challenge.
Previous Post
Europa
Next Post
Bellerophon and the Dragon 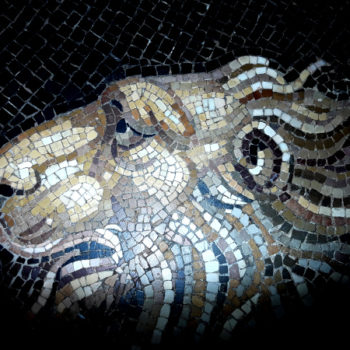 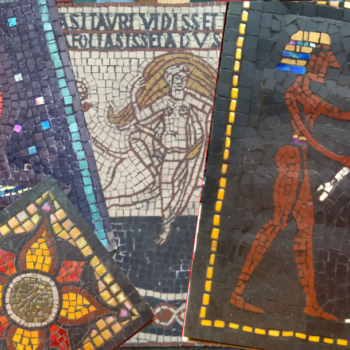 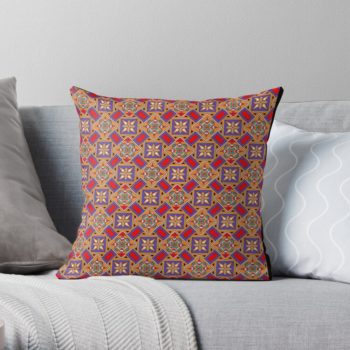