The Mosaic of the Seasons in Corinium

I just received from Britain an old book, published in 1850 “Illustrations of Remains of Roman Art in Cirencester, the site of ancient Corinium”. 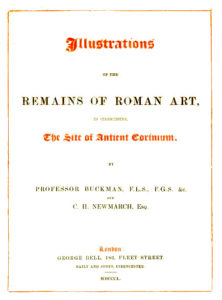 This book is remarkably illustrated with drawings and I wanted to share some of these beauties.

During the progress of making a sewer on the north side of Dyer street in Cirencester, a portion of the floor, was exposed ; this, on being traced to its boundary walls, was found to be a nearly perfect pavement of a room about fifteen feet square, running in an oblique direction across the street. (B in the wood cut.) 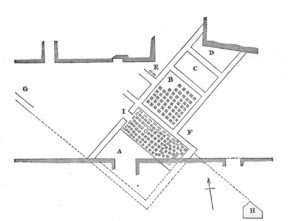 Ground plan of the Roman Villa at Dyer St.

This floor of room A is 25 feet square. It was covered by a Seasons mosaics consisting of nine medallions, each nearly five feet in diameter ; each medallion is included in an octagonal frame, formed of a continuous twisted guilloche, in which bright red and yellow tessellae prevail. 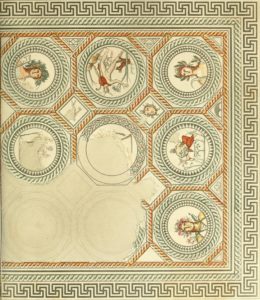 The central medallion is distinguished from the rest by a double twisted guilloche circle, in which we have, as colours, black, green, ruby red, yellow, and white.

The external borders form a square in continuation of the bright coloured twisted guilloche, then follows a guilloche of a colder tone, framed by a frieze of Swastiskas and triangular black frets. Finally a wide border of greyish tessellae fills the space between the main floor and the walls.

The pictorial representations in the medallions may be divided into two sections :

! – The Classic Groups were originally five, one in the middle of the pavement, and one on each side between the different corner heads.

My book did not provide detailed drawings of these medallion, you can visit the Corinium museum website to see related pictures…

Of these there remain three out of four, as we may conclude that one occupied either corner of the floor, these are,

A fine head, with a chaplet of ruby-coloured and white flowers, intermixed with leaves, extending over the crown and sides of the face. A bird is perched upon the left shoulder ; against the right rests a flowering branch.

Her bust is covered by a white garment – the Palla – fastened by a button, or fibula, on either shoulder. 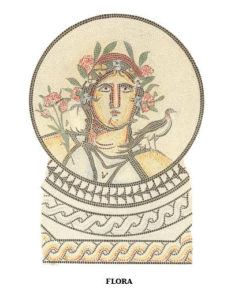 Flora, goddess of flowers and Spring.

Nothing could better symbolize Spring than the ruby red flowers, with which the head of her figure is adorned, which are composed of tessellae of a bright ruby-coloured glass. This is the only instance of the use of this substance in any of the pavements of Cirencester. The Swallow {Hirundo rustica), for the long wings and forked tail evidently refer to this bird, which is abundant in all parts of the Continent as well as in Britain is proverbially the ” harbinger of Spring.”

In this bust the head, which is most classically drawn, is crowned with a chaplet of leaves, intermixed with ripe and partially ripened corn ; against the left shoulder rests a reaping hook. Against the left shoulder are placed some ears of corn. These accessories, though simple in themselves, yet have a breadth of effect and vigour of drawing which admirably correspond with the dignity of expression of the goddess, who was one of the most revered of the Roman pantheon, and whose rites were ever observed with great fervour and strictness by the Romans. 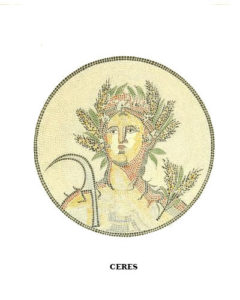 Ceres, goddess of corn and Summer

This medallion is no doubt meant to symbolize the season of Summer. It occupied the northern corner of the floor.

The head of the goddess of fruits occupied the medallion of the West corner of the pavement. 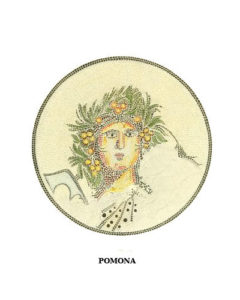 Pomona, Goddess of fruits and Fall

Her face full of dignity and classic beauty is gracefully set of by a crown of fruits interwoven with autumnal leaves adorning her forehead and temples. She is dressed in a white stola, figured with black spots, which is fastened by a button over the left shoulder, and against the right shoulder is seen an edged instrument, either be a pruning hook or a knife for gathering grapes.

I most of the information gathered from my book. since other mosaics were discovered  since 1850, some of it might now be obsolete. You can see pictures of these beautiful mosaics at the Corinium museum website, or even better actually go visit the museum (I will do this one day ! ).

In a very future post I’ll tell you how the Corinium hare inspired me to create an other mosaic ! 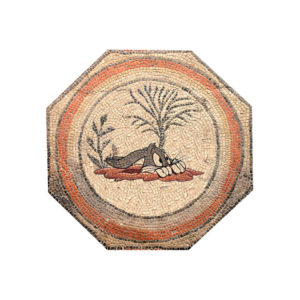 Frédéric LECUThttps://mosaic-blues.com/
I have always been fascinated by ancient art and architecture. Why and how did our ancestors build the Pyramids, Stonehenge, the Pont du Gard, the Cathedrals ? Even today, building such monuments would represent a technical challenge.
Previous Post
The Griffin Minaudiere
Next Post
Roman floral patterns