a stone and glass mosaic reproduction of a Michi ( Do or Tao) symbol drawn in regular script, one of the five major styles of Chinese calligraphy.

a stone and glass mosaic reproduction of a Michi ( Do or Tao) symbol drawn in regular script, one of the five major styles of Chinese calligraphy.

Do, Michi, Tao, can be translated as “The Way” as in Judo or Kendo, the ways of flexibility or of the sword.

In Chinese and Japanese calligraphy, Chinese characters can be written according to five major styles intrinsically linked to the history of Chinese script.

I have realized several  “Michi” mosaic signs for martial artists friends, in regular and cursive scripts. 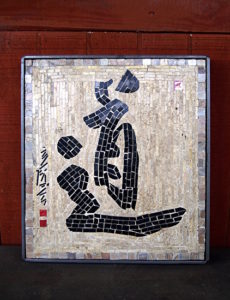 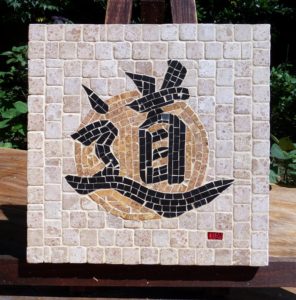 a stone only regular script Michi.

The regular script is the most easily and widely recognized style, as it is the script to which children in East Asian countries and beginners of East Asian languages are first introduced. For learners of calligraphy, the regular script is usually studied first to give students a feel for correct placement and balance, as well as to provide a proper base for the other, more flowing styles. 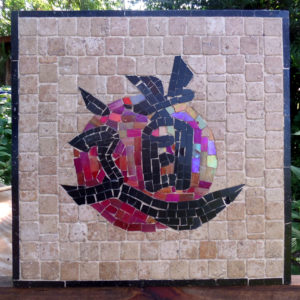 This particular piece made of travertine, granite and bright red irridescent glass is 14.5 x 14.5 ” and is framed with steel.

It is an accurate reproduction of the Michi used on the back of World Yoshukai Karate training uniforms.

There are no reviews yet.