A small stone mosaic of a traditional Japanese family crest, symbol of happiness and longevity 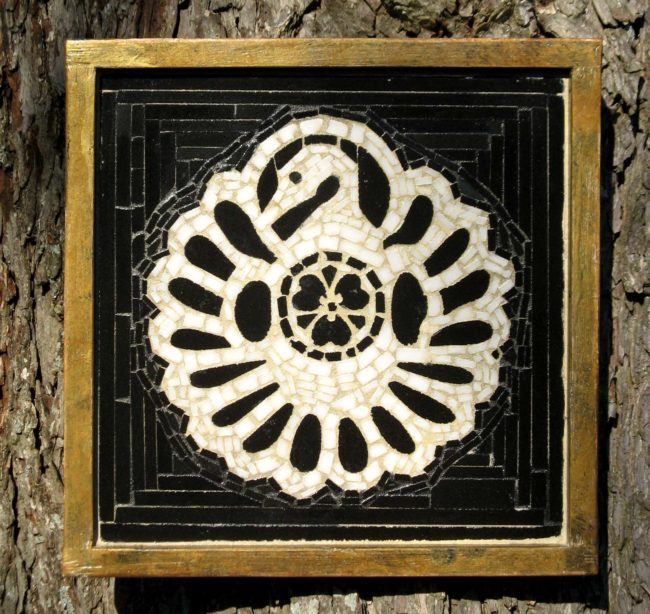 A small stone mosaic of a traditional Japanese family crest, symbol of happiness and longevity

The origin of the Japanese family crest or mon goes back to the eleventh century when high ranking officers began displaying embroidered emblems on the formal attire all courtiers had to wear at the Imperial Court. They soon started to display them on their carriages as well. With time, the designs became more refined and elegant. These emblems later became the formal mon (crests) still used on formal Japanese garments.

Originally only the members of a family would wear such crest. They soon became worn by all samurai belonging to a clan.

A symbol of longevity

Throughout all of Asia, the crane has been a symbol of happiness and eternal youth. In Japanese, Chinese, and Korean tradition, cranes stand for good fortune and longevity because of its fabled life span of a thousand years. They are also a symbol of hope and healing during challenging times.

The Japanese refer to the crane as the “bird of happiness”. The wings of the crane were believed to carry souls up to paradise. Mothers who pray for the protection of the crane’s wings for their children will recite the prayer:
“O flock of heavenly cranes
cover my child with your wings.”

This mosaic reproduces the emblem of Jikishin kai, an association founded by the late Masayuki Shimabukuro, Hanshi, to promote in the United States the teachings of Muso Jikiden Eishin Ryu, an ancient form of Japanese swordsmanship.

The mosaic is made of white marble and granite. The wooden frame is painted in antic gold tones.

There are no reviews yet.

Be the first to review “Crane Montsuki” Cancel reply