When ISIS started their eradication campaign against the Yezidi people in 2014 they murdered a great number of boys and men and systematically enslaved and raped women and girls. Several hundreds of them are still missing.

Many Yezidi escaped the terror by trekking through arid lands and became refugees. Those were the lucky ones. 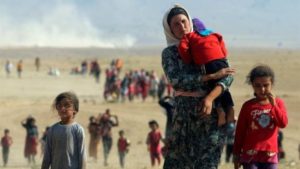 The older ones who could not flee  either died of dehydration or where executed by the terrorists. Girls and women left behind were turned into sex slaves, raped and sold as cattle.

Some Yezidi people who lived abroad decided to organize to try to help their oppressed brothers and sisters.

I was not sure what I could do but I wanted to help.

In 2015, I created 8 mosaic portraits of the eyes of some of those refugees with the hope they could be sold to raise funds to help their situation.

I invented for these portrait my Opus Pixellatum technique, which uses rows and columns of square tiles to create the mosaic in the same manner the pixels are used to generate an image on a computer screen.

I am very pleased to announce that 4 of those mosaics are on their way to the Iraqi embassy in Washington DC to help raise awareness about the struggle of the Yezidi people. 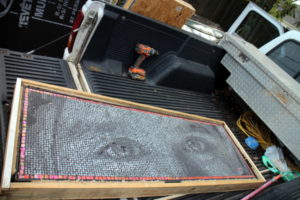 Yezidi 11 mosaic in its shipping crate.

I donated the mosaics to the Free Yezidi Foundation. They will be on show at an event held at the Iraqi Embassy next week end as well as at other events in the Washington DC area.

These mosaics are visible on my SIte :