The modern byzantine mosaics of Notre-Dame de la Garde perfectly illustrate how mosaics were incorporated in the Neo-Byzantine sacred architecture of the 19th century.

Built on top of the highest natural peak of the area, Notre Dame de la Garde, also known as “La Bonne Mere” – the good mother – is the most recognizable of all buildings in Marseille. It looks down protectively over the entire city. A church had been built there in the 13th century and later, the basilica was built and completed in 1864.

The Byzantine revival (called Neo-Byzantine) occurred in the late 19th century when buildings, like Notre-Dame, were built in the style of late Roman empire architecture with complicated structures, lots of domes and of course gorgeous mosaics. 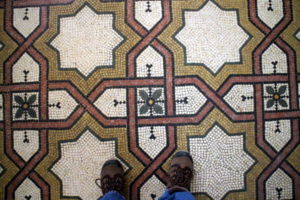 Detail of the nave’s floor mosaics 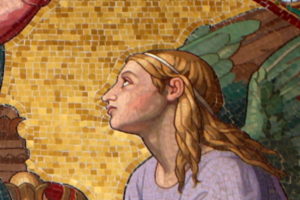 Angel from the Entrance mosaic

The Basilica is dedicated to the Virgin Mary and many motives laid in the mosaics are Christian symbols dating back to the Middle ages or earlier.

Except for the side walls on which the ex-votos are displayed, all the walls of the Basilica are covered with modern byzantine mosaics. 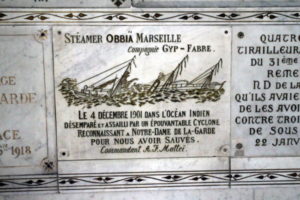 Ex Voto from sailors having survived a storm

The main mosaic of the cul-de-four of the apse 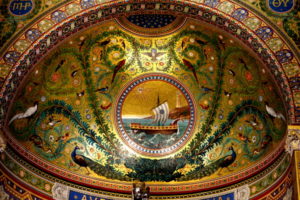 Surrounded by dolphins the boat, symbol of the Church, sails on a rough sea: the Church is often tossed by the events of the world. Its sail bears the monogram of the Virgin Mary and, in the sky above, the M-shaped radiating star recalls that Mary also is “the star of the seas”. She protects the boat of the Church in its journey towards the harbour to the right, dominated by a lighthouse surmounted by the cross of Christ: Mary helps the Church progressing towards Christ. 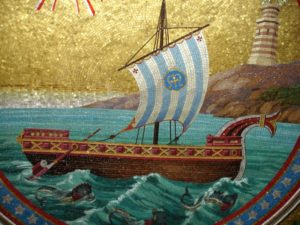 The Ship, symbol of the Church 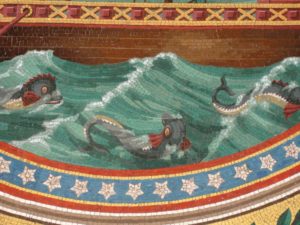 Dolphins swimming beside the ship

There is something terrible about mosaic dolphins. Mosaicists must not like sailing, their dolphins always look like monsters whereas their birds look gorgeous…

The ship medallion is surrounded by magnificent arrangement of foliages and birds: in the middle, a dove symbolizes the Holy Spirit attended on each side by many birds of different species : golden pheasant, goldfinch, heron … 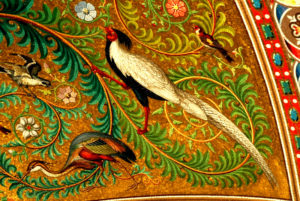 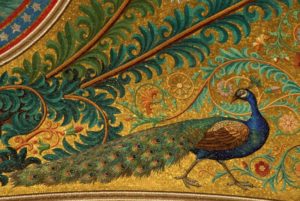 Peacocks are a symbol of eternal life and resurrection in early Christian religion.  The peacock angel is also a central figure of the Yazidi religion.

This very harmonious composition is one of the most beautiful mosaics built in a French sanctuary during the 19th century.

The Annunciation mosaic stands above the great mosaic of the apse. The archangel Gabriel visits the Virgin Mary to ask her if she accepts to be the mother of the Messiah. After a dialogue with the angel, she gives her acquiescence: “I am the handmaid of the Lord, let everything happen to me as you have told me”. 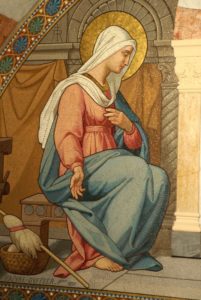 Above the choir, four angels support a large crown of flowers. 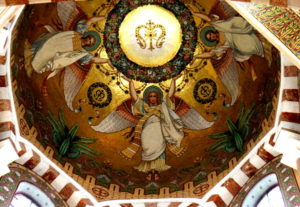 The three domes above the nave are covered of gold mosaics, embellished with birds and flowers: 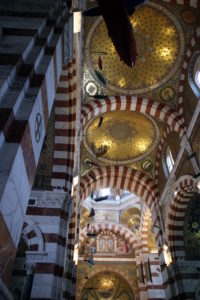 Each dome is circled by a white banner inscribed in Latin and Greek with quotes from Western and Eastern scriptures relating the life of Mary. They are illustrated by beautiful medallions located under them. 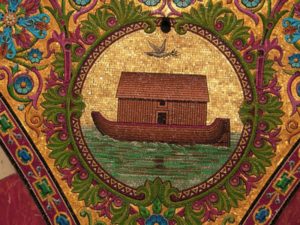 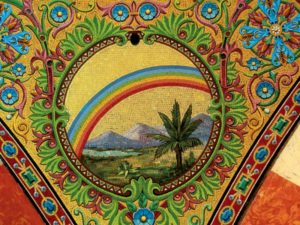 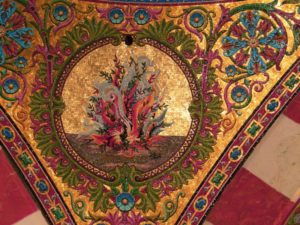 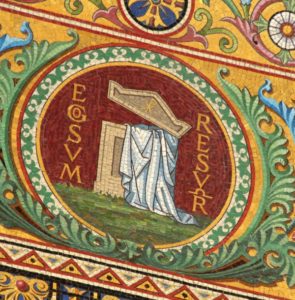 The lower parts of the two transepts of the choir are inspired by the dark blue mosaics of the 5th century mausoleum of  Galla Placidia  in Ravenna. 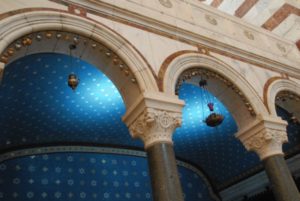 These vaults also display 6 different coat of arms of Pope and Bishops. 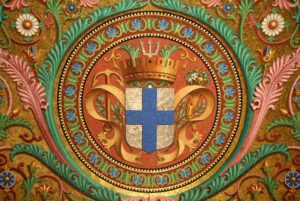 Blason of the city of Marseille 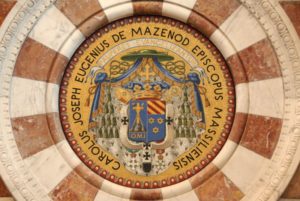 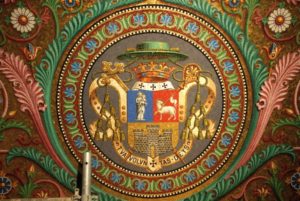 Six lateral chapels are dedicated to :

Each chapel also displays the name and the coat of arms of the families who financed their decoration and an altar decorated with small but beautiful work in Opus Sectile. 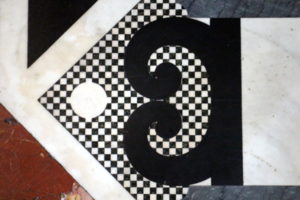 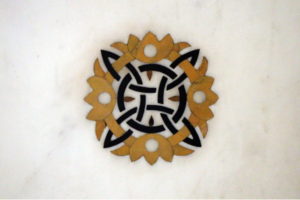 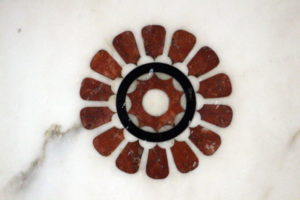 Basilica of our Lady of the Guard 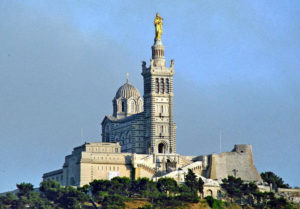